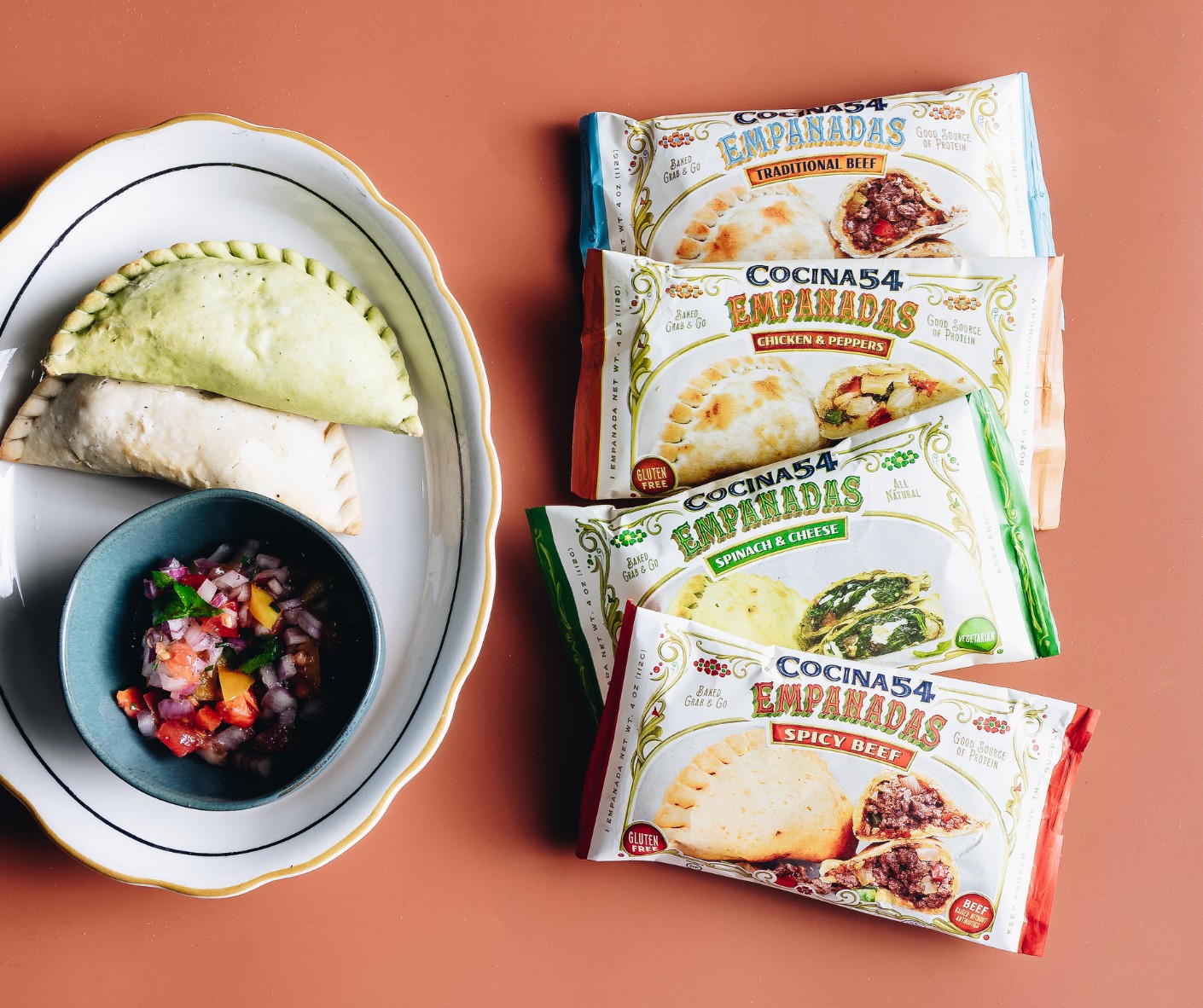 Today we’d like to introduce you to Cecilia Panichelli.

Hi Cecilia, it’s an honor to have you on the platform. Thanks for taking the time to share your story with us – to start maybe you can share some of your backstory with our readers?
The story behind Cocina 54 truly goes back to where we came from. It’s an undisputed fact that empanadas are the most widespread snack in Latin America, they are basically the taste of our culture! We grew up eating it, and we wanted our children to experience the same flavors of childhood that we did. Immigrating from Argentina, we began to crave empanadas but couldn’t find them anywhere in stores. So, our whole family would gather in the kitchen and we would make batches on batches of empanadas to save in the freezer for the week. Convenience was a key player here. We found that we could munch on them at any time of the day… which was so great with a house full of hungry kids.

We soon realized that there are families all over who were seeking convenient snack options that still had better-for-you ingredients. There was an obvious gap in the market to fill with food that fits the average consumer’s lifestyle. From there, the idea for Cocina 54 was born.

Once we officially started the company, we made sure to figure out a way to produce empanadas that still had fresh ingredients and a made-from-scratch recipe. Culture was our biggest inspiration. In order to create a connection between what people in Argentina eat and what people in America eat, we married various ingredients together to create truly Inspired flavors.

Culture is shown in our packaging as well. We wanted our customers to both tastes and visually feel like they are in Argentina. The art you see on our empanada packages is a style called fileteado porteño, you would see it on all of the shops and vendors in Buenos Aires! So we thought, what better way to bring that feeling to customers than this?

Of course, the question we get most often is “why the name Cocina 54?”. We actually named the company after the area code in Argentina – which is the number 54. Even from the beginning, we knew that’s what it had to be. It’s a simple tribute to our roots. At first, we were going to name the company Kitchen 54 but got the feedback that Cocina 54 just sounds cooler. Plus, we are native Spanish speakers so it really just made sense.

The result of all of this is a tribute to where we came from and where we are today.

I’m sure you wouldn’t say it’s been obstacle free, but so far would you say the journey have been a fairly smooth road?
(me laughing) Trying to be positive, I will say Nothing worth pursuing is easy, right? It certainly there is no smooth road, even with my 15 years of experience in the CPG industry, the frozen category has its own challenges, and it has certainly become more difficult to operate since the pandemic. I will say everyone is under a lot of pressure to gain efficiencies in terms of logistics and retailers like HEB that us to support local brands are having to focus on their own difficulties and partnering with larger accounts that can support them in their logistics, therefore, start-ups like us are finding it much more complicated to continue to have product on shelf as retailers and logistics prioritize a truck with pizza rather than empanadas.

We’ve been impressed with Cocina 54 Empanadas, but for folks who might not be as familiar, what can you share with them about what you do and what sets you apart from others?
Founded in 2017, Austin, Texas-based Cocina 54 aims to create a “new generation” of better-for-you Latin American foods, according to founder Cecilia Panichelli. The company stays true to its Argentinian roots with authentic flavors and packaging design inspired by an Argentinian painting technique called Filete Porteño.

Cocina 54 is capitalizing on the fast-growing frozen food segment and consumers’ increasing interest in international flavors, both trends which have been accelerated by the pandemic. Cocina 54’s four SKU line of gluten-free empanadas are currently sold in the freezer aisle at select locations of retailers such as Target, Wegmans, H-E-B and Go Puff, as well as through Amazon and on their own website. They currently sell four savory gluten-free delicious flavors: Traditional Beef, Chicken & Peppers, Spicy Beef and Spinach & Cheese.

All empanadas are made from scratch using 100% fresh vegetables and antibiotic-free proteins.

Consumers are impressed by the flavors and convenience of the frozen, pre-baked empanadas, which can be prepared in the microwave or oven. The brand has reached profitability without taking any outside funding, which is a promising element for a startup, along with Cocina 54’s scalable business model. Panichelli’s previous CPG experience, which includes roles at Nestlé and barbecue sauce maker Stubb’s, also made the brand attractive from an investment perspective.

Before we let you go, we’ve got to ask if you have any advice for those who are just starting out?
Only 1% of all businesses get funded, so plan accordingly. 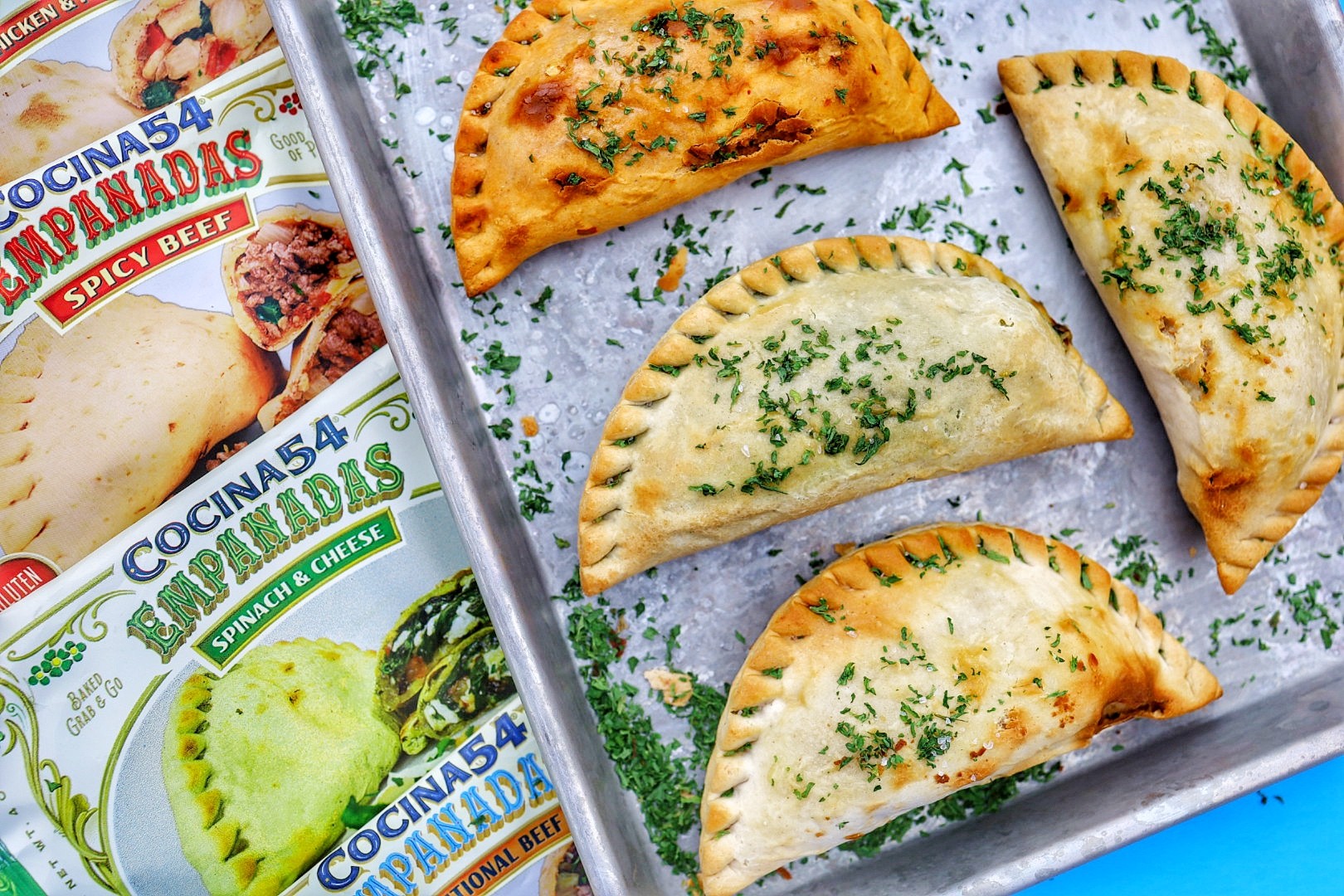 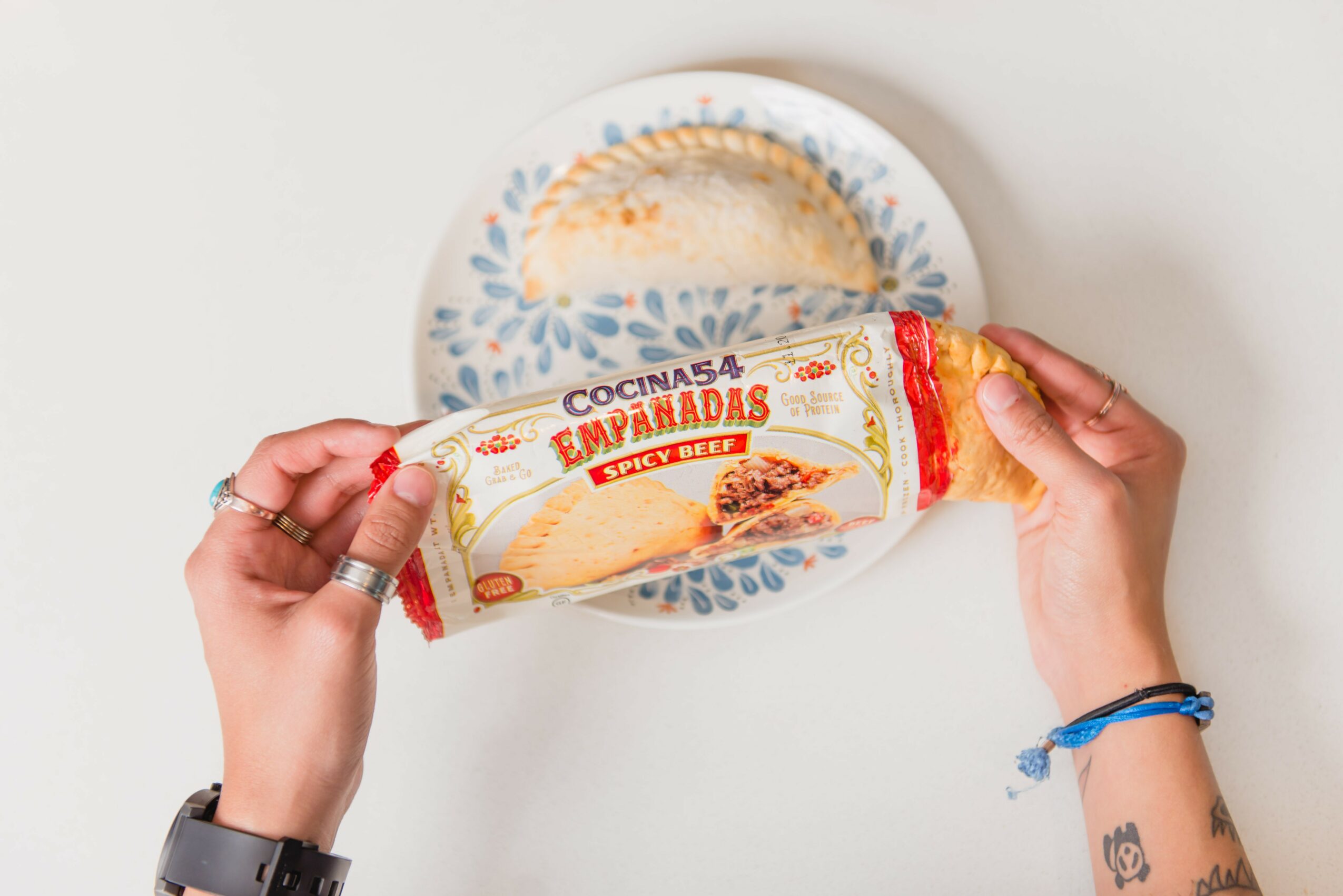 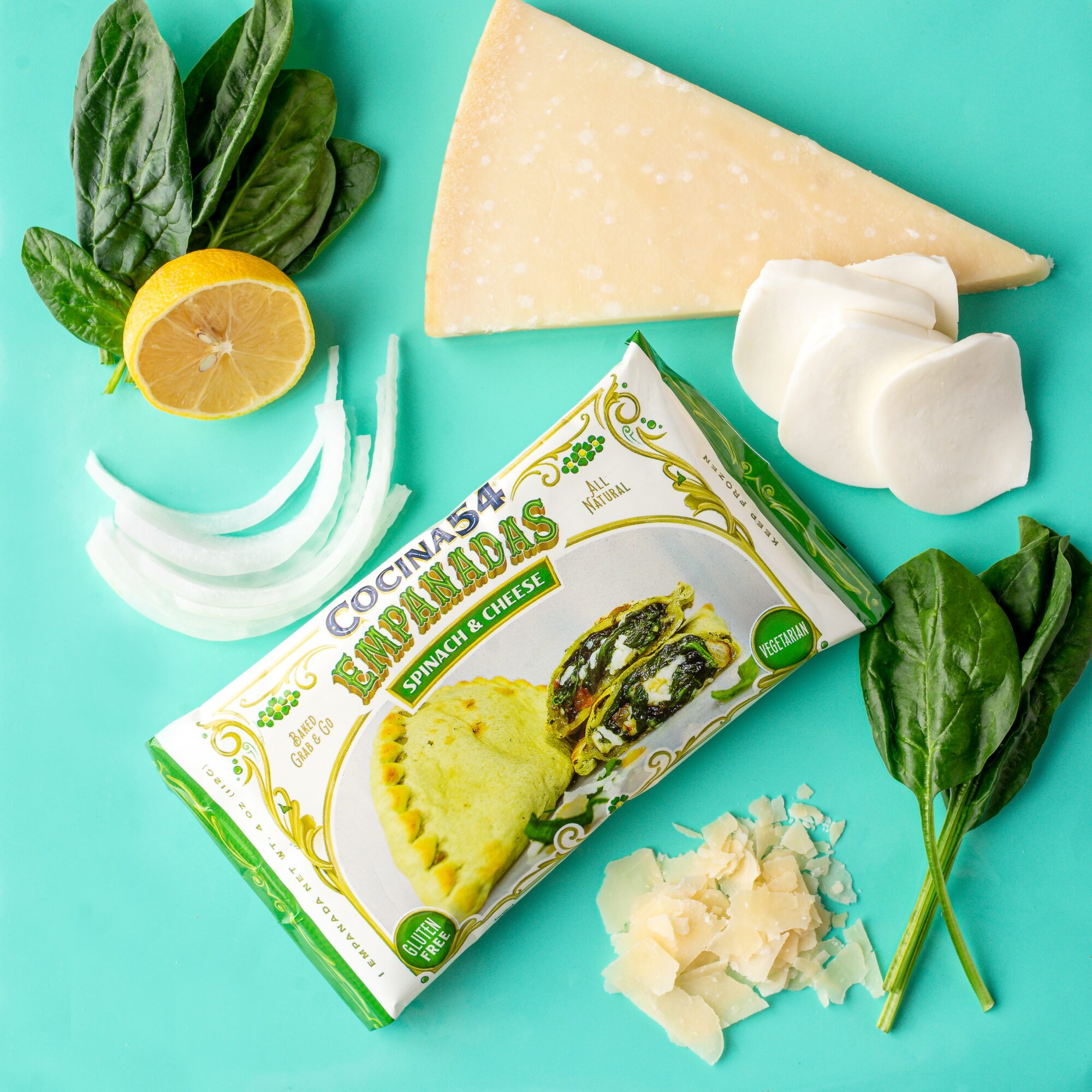 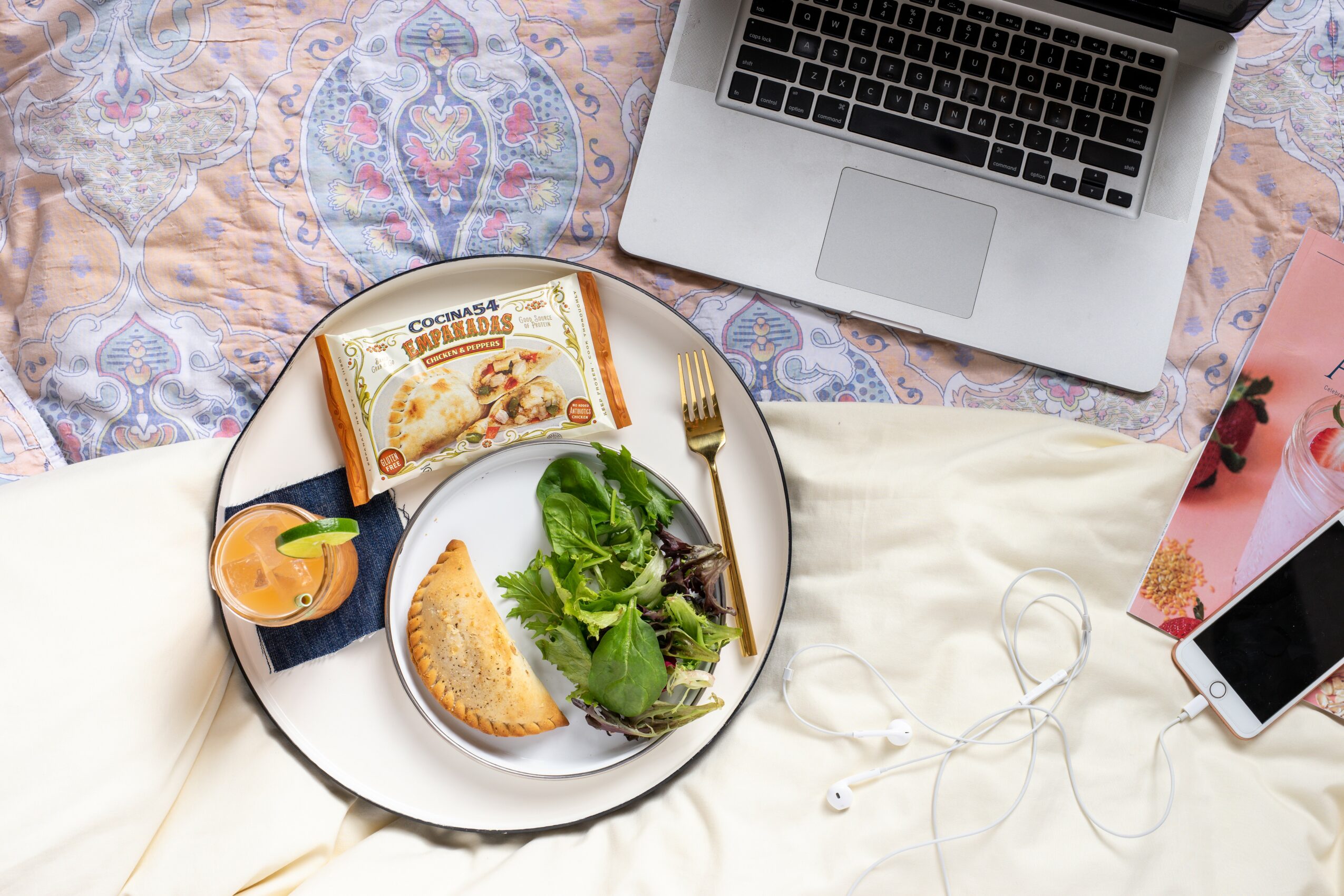